The Combat Zone is a map available from level 50, where players can take full advantage of the PvP functionality of Metin2, sneaking in a kind of “all vs all.”
By killing other players, your character will earn Battle Points, with which will get prizes and appear in a special weekly ranking system.

Categories: Player vs Activity, Player vs Player
Add to wishlist

The Combat Zone is a map available from level 50, where players can take full advantage of the PvP functionality of Metin2, sneaking in a kind of “all vs all.”
By killing other players, your character will earn Battle Points, with which will get prizes and appear in a special weekly ranking system.

How can I enter a Combat Zone?

– Click on this letter and a Combat Zone menu will appear that contains important information that should be read. On the bottom right is a button to enter the Combat Zone. Accessing this button will take you to a Combat Zone in 3 sec.
– The War Zone is open several times a day, opening times can be viewed at the left part of the window, all are configurable from serverside.
– Entering the battle area is behind the “B” button at the bottom left of the minimap.
– Available from level 50.
– You can not request access to the Combat Zone in a dungeon.
– You can access the map only during the specified opening times.
– Within the zone, the spawn spot is generated randomly.
– You have to wait 10 minutes from the last entry into the combat zone. 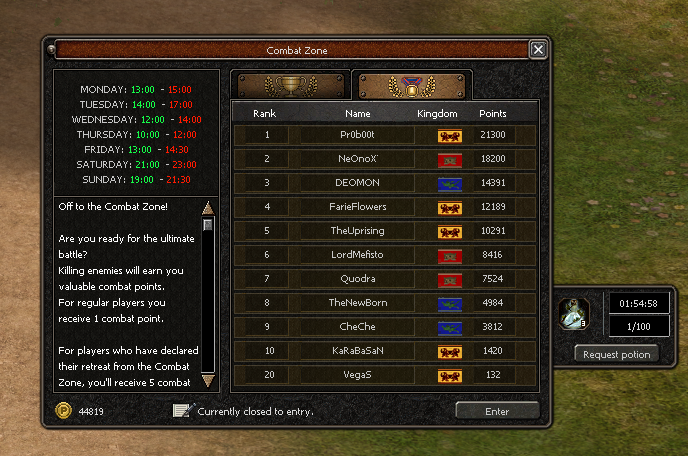 – Here exist 2 types of ranking table, weekly and general (all time) with top 10 players who have more points, the last slot (slot 11) is the slot for you, there you can see your ranking position (in my case I am on position 20 in the rank).
– Here you can see the position of rank 1-10, name, kingdom, points collected.
– In the left part you have the table with information, opening and finish time for each day, they are updated each time they are modified in the server, and the time when the combat zones start and stop is the server time (FreeBSD).
– At the bottom of the window you can see the actual real points you can use in the shop.
– In the middle below you can see the status of the gates to the combat zones, when turned on or off depending on the time zone shown in the table, will be updated in real-time when the letter B in the mini-map is flashing.

How can I request a battle potion?
A powerful potion that increases your attack and defense points and bolsters you with +50,000 hit points (only in the Combat Zone map ).
On the right side you will be able to ask the system for 3 potions once every 6 hours, but each time you have to kill 100 random monsters, the time elapsed until the next request can be seen in the window, as well as the current monsters killed and the maximum limit.

How is working the ranking?

How can I get points?

What happens if I die?

Reincarnation object to resurrect instantly, this item can be obtained from Guardian Combat Zone, you will resurrect with 100% hp points.

How can I leave a Combat Zone and save my battle points?

You can leave the War Zone anytime. But this depends on whether or not you have accumulated battle points:
No Battle Points:

Why I can’t write or read anything in the Combat Zone?
These features are blocked in the combat zone because it makes the action much more exciting, these configurations can be disabled / enabled from config.

Can I have chances against level 105+ players at level 50?

What do I need for battle points?

The number of points gathered can be seen at the GuardianCombat Zone store: